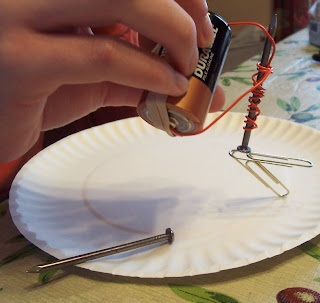 Continuing on with the description of the labs we did in conjunction with the PBS NOVA video Einstein's Big Idea, here are our adaptations of the directions for two activities using batteries: 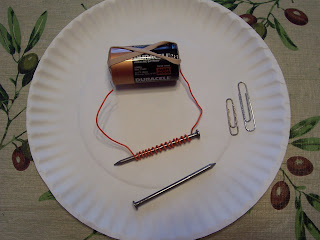 Explanation: The point of this station is that the magnetic field can do work. It can lift objects as the energy of the field is transferred to the paper clips. Since the strength of the nail's magnetic field is proportional to the number of coils of wire around the nail, we also experimented with different lengths of wire and numbers of coils. 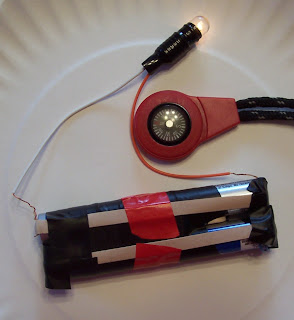 Explanation: The light bulb demonstrates how electrical energy can be converted to light and heat energy. Most of the light bulb's energy is given off as heat. The electrical energy is also the result of a transformation, from chemical energy (in the battery). As we saw in the documentary, Michael Faraday, a self-taught scientist in 19th century England, was the first to propose that the compass was being affected by invisible lines of force flowing around the wire.
Posted by Kathy Ceceri at 2:50 PM