This week, we made a cloud chamber to see radioactive particles just using dry ice. It was surprisingly easy to do, and anyone can make it. The only hassle was getting a few of the materials, and we had a couple setbacks, but when we got it working it was definitely worth it.
The set-up 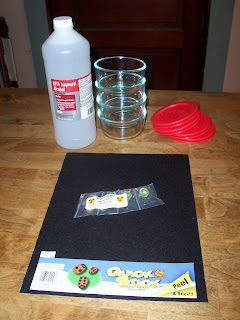 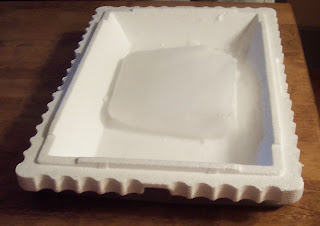 All you need is:
A quick side-experiment we did was light up the marbles with a blacklight, which came out really cool: 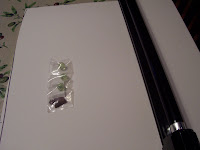 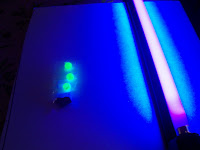 We put a few different variations of the cloud chamber together, but we only got one to work. Our working version is detailed below, but we also have some links that have some more versions of how to make the chamber at the bottom of the post.

What we did was cut out a circle of the sticky-back felt, and attach it to the inside of the lid. We then cut a strip of construction paper and put it around the outside of the container to block out light. We left a little “window” to look in and a smaller window in the back to shine the light through. 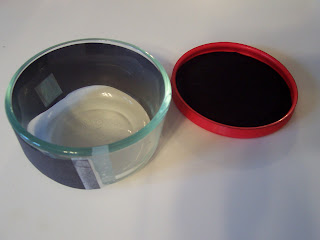 To use the cloud chamber, we first soaked the felt with the alcohol. We did this outside. The next part was to simply place the uranium marble into the container. To hold the slab of dry ice, we set it in the lid of the Styrofoam cooler (on top of a metal tray). We put the container on top of the dry ice slab, and then put the heated washcloth on top. Last, we placed the flashlight so it shined in the back window and waited for clouds of alcohol vapor to form. This took a few minutes. 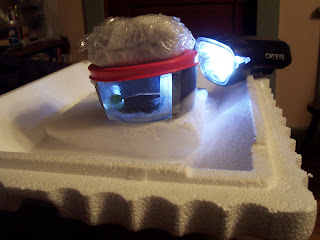 When the vapor forms, you'll see what looks like slowly-falling rain inside. Particles being emitted by the marble formed lines in the fog. If you look closely at the two photos below (click on them to enlarge), you can see the particles shooting off from the marble. Look about half an inch below the marble in the second shot and you'll see a white line heading off toward the left. That's the ionization trail. 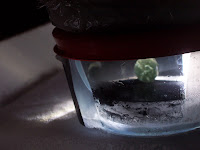 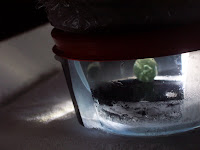 Afterwards we decided that the experiment would have worked better if we had used a glass petri dish with a clear top, because it was hard to see through the little window.


How it works
So how do dry ice and marbles create visible particles? When the chamber is cooling down, the air can't hold the warm alcohol vapor. When this happens, the alcohol starts forming into small clouds. At the same time, the radiation source, the marble in this case, is decaying and releasing charged particles throughout the container. These particles leave a trail of ions which shoot through the vapor clouds, and make visible trails in the fog.

According to Theodore Gray's website, www.periodictable.com, the emissions from the uranium marbles are alpha particles. Other sources of radiation may also give you beta and gamma particles. (Here's a student-made explanation of the different types of radioactive decay.)

You might have to experiment with different types of chambers to get a good result. We combined two different versions, both of which work well. You can see them on YouTube. The first, from Jefferson Lab, uses a petri dish and a needle impregnated with Lead-210 as a radiation source. The second video is from Scottish student Holly Batchelor, who won the Intel International Science and Engineering Fair's First Award for physics and astronomy. She built her cloud chamber out of a plastic aquarium, and used naturally-occuring cosmic rays as her radiation source. A more complicated version by Andy Foland has diagrams explaining what you might see.
Posted by Kathy Ceceri at 7:43 AM