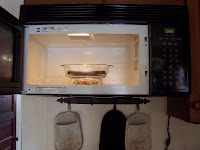 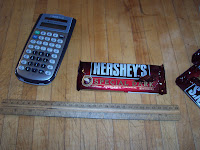 I wrote up our latest lab as a post for GeekDad, and it ended up going popular on Digg! (For those who care.) To see how we measured the speed of microwaves with a chocolate bar, follow the link.

However, we did several trials, so here are some photos from our earlier attempts. And yes, the scale did go up in the last few days... 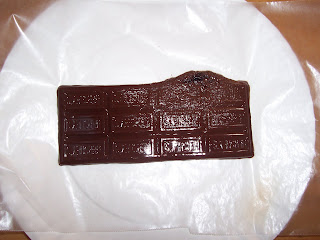 We only got only hot spot with this one ... and the paper plate started to burn (note lower right corner). 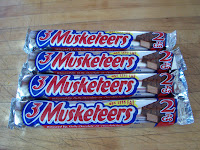 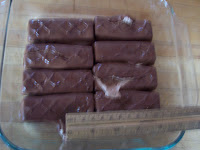 We tried multiple bars to get broader coverage. This worked a little better. 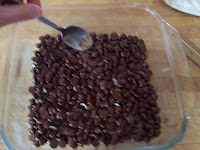 A dish full of chips provided the best coverage of all, but was too hard to pinpoint the hot spots. After several minutes of microwaving, we got one fused, hard point of chocolate (indicated by spoon) but not a second spot to measure.
The results:
Best holder: glass baking dish
Best stand (to cover the rotating thing in the microwave): small plate
Best chocolate: Valentine's Day cherry cordials
This experiment has also been done with marshmallows and by kids on YouTube. 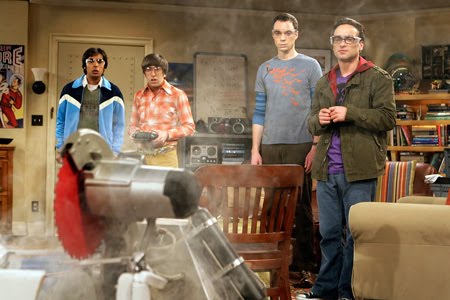 If you are a fan of The Big Bang Theory -- and I don't watch near as often as I should -- then you will enjoy the blog of UCLA particle physicist David Saltzberg, who is the show's consultant. The Big Blog Theory explains the science behind the episodes.

The show can be seen on CBS Monday nights at 9:30 EST.

Hat tip to a post by fellow GeekDad writer John Booth.And for other interesting physics blogs, check the list way down in the sidebar.
Posted by Kathy Ceceri at 6:48 AM

Email ThisBlogThis!Share to TwitterShare to FacebookShare to Pinterest
Labels: Humor 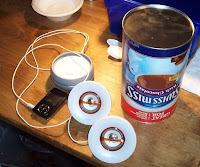 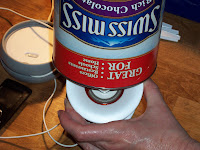 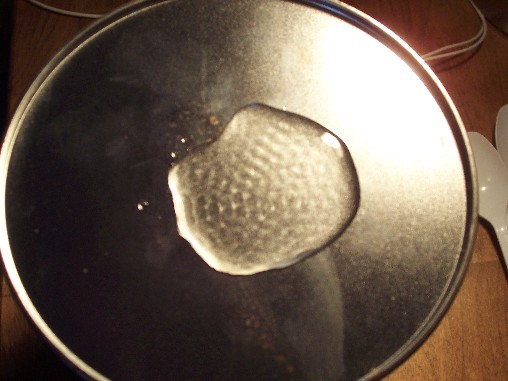 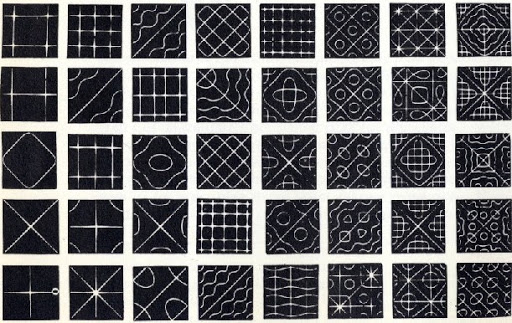 Email ThisBlogThis!Share to TwitterShare to FacebookShare to Pinterest
Labels: Labs

Book Review: How to Teach Physics to Your Dog and The Macroscope 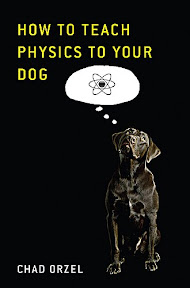 (I wrote this article for the Albany, NY Times Union newspaper. It originally appeared, in edited form, on January 24, 2010.)

When you think about it, “modern physics” isn’t really all that modern anymore. Einstein began drafting his theory of relativity in 1905, and quantum mechanics – which describes how things work at the sub-atomic level – was described by Max Planck in 1900. Today quantum mechanics is at the core of everything from bar code scanners to computer chips. It’s the most accurately tested theory in the history of science.
And yet very few people are aware of even its most basic concepts. Ideas like particle-wave duality (the fact that light and matter has both wave and particle nature) are rarely covered in college physics classes, let alone high school. So when Internet rumors claim that the CERN Large Hadron Collider, which smashes atoms together to see what pops out, is about to suck the Earth into a black hole, or when the latest DaVinci Code book features a physicist who uses “thought particles” to transform matter, most people don’t know what to believe.

That’s a gap two new books by local educators are hoping to bridge. In “How to Teach Physics to Your Dog,” (Scribner, 2009) author Chad Orzel explains quantum mechanics to Emmy, his German Shepard mix, in language so down-to-Earth and entertaining that even humans can understand. Why a dog? As Orzel, an associate professor in the department of physics and astronomy at Union College in Schenectady, explained recently, dogs have no preconceptions about where things come from. That makes it much easier for them to accept the idea of virtual particles and parallel universes.

“As bizarre as it seems to a human, as far as a dog is concerned dog treats appear out of the air,” Orzel said. “She will sit there staring, hackling at evil squirrels from another dimension.”

For readers, following Orzel as he discusses the probability of bunnies made of cheese suddenly appearing in the backyard, or whether dogs can use their wave nature to pass around both sides of a tree at the same time, makes modern physics easier to understand.

“As scientists,” Orzel said, “we speak about it in math. I wanted to find ways to get around that, to show how fascinatingly weird the world is without forcing them to go through three years of physics.”

At the same time, Orzel added, “There is some heavy stuff in the book -- decoherence, ‘many worlds’ theories – that you don’t often encounter in popular treatments of the subject. The nice thing about writing with the dog is that whenever things get a bit thick, I can have her break in.” At those times Emmy pipes up to remind Orzel, “I don’t want to describe the universe, I want to catch squirrels.”
The goal for Orzel is to help readers understand that although the universe is a really strange place, it still has rules, and physicists have been sucessful so far in understanding them.

“You can’t will yourself into another universe where you’re wealthy,” he said. “I hope the dog is cute enough to carry people past some of the need for it to be magic.”

While Orzel’s book was written for adults whose schooldays are behind them, “The Macroscope,” the first in the Adventures in Atomville series, aims to inspire kids who have yet to set foot in a physics classroom. It’s a fantasy story in which all the characters are atoms which behave in ways that reflect the properties of their particular elements. They eat (and emit) photons, and swat away pesky electron gnats. But the physics is hinted at, not explained outright. (A website explaining the science behind Atomville is under development.) Co-authors Jill Linz, a senior physics teaching associate at Skidmore College in Saratoga Springs, and Cindy Schwarz, a professor of physics at Vassar College in Poughkeepsie, both said that the plan was to pique kids’ interest, not lecture to them.

“We don’t necessarily want these kids to walk away knowing what’s going on with subatomic particles,” explained Schwarz. “We want them to keep the words in the back of their heads and feel more comfortable when they hear them again.”

Linz first developed Atomville as a way to reach non-science majors, and later went on to produce physics videos for elementary schools. Schwarz uses creative writing and music in her physics classes for non-majors, and has published a book of her students’ physics poems and stories called Tales from the Subatomic Zoo.
Linz and Schwarz are hoping schools will invite them in to talk about their book and about physics. Last spring Schwarz showed students in Poughkeepsie how atoms emit photons and letting them look through diffraction glasses to see the spectrum created by an element. She was happy to find that, months later, they still remembered the concepts they learned.

“They really got something out of this,” she said.
Posted by Kathy Ceceri at 9:00 AM 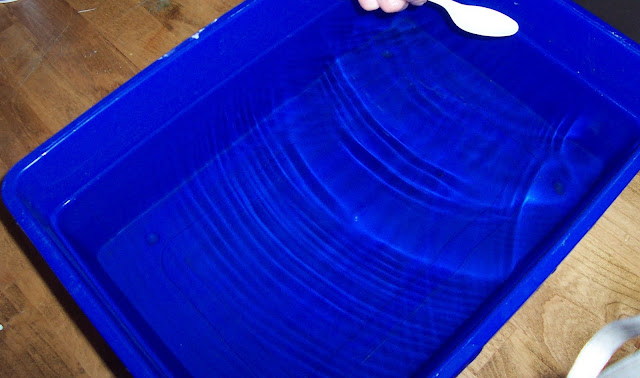 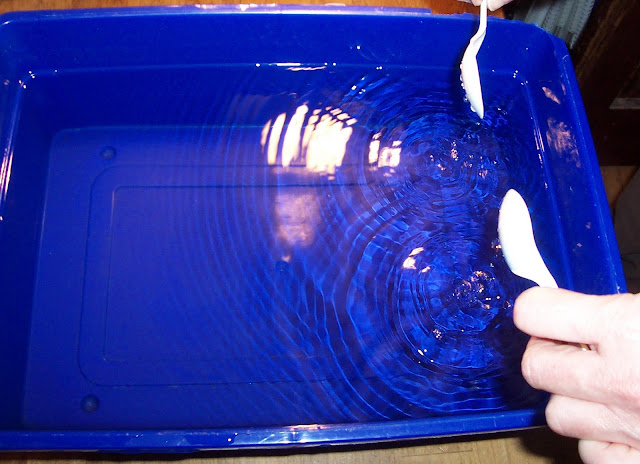 I've got a post up on GeekDad today about Florida physics teacher Luther Davis, who will be riding his bike in his classroom for 7 hours tomorrow. While he's pedaling, he’ll have his students stream his bike ride/physics lesson live from the classroom and take questions via online chat. 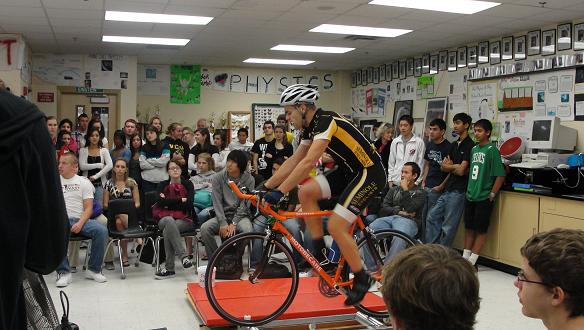 Davis achieved his goal, pedaling 143.1 miles in 7 hours (while teaching), and raised more than $1,600 for the American Diabetes Association. Great Job Luther!

We got to watch Davis talking about angular and linear momentum, and even asked some questions via the chatroom. It was pretty cool! His website Cycling Physics now shows graphs of speed, heart rate, and cadence (pedal rotations per minute) for his ride. Video segments will be available soon.

We wish Davis luck when he undertakes the ADA Tour de Cure in Orlando on February 28, 2010.

We also challenged Davis to join us here in Upstate New York this summer for the Saratoga 12/24 and Adirondack 540 bike races (presented by Adirondack Ultra Cycling, aka my husband, John Ceceri)!
Posted by Kathy Ceceri at 7:52 AM