The Famous Double-Slit Experiment and the DIY Quantum Eraser 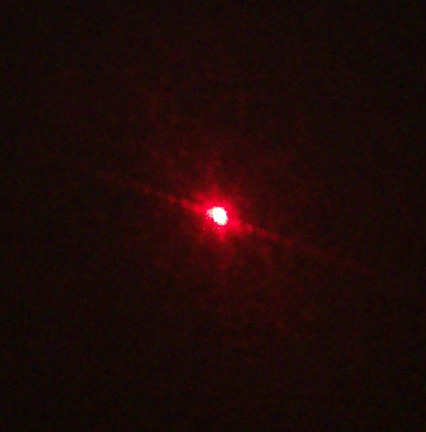 In How to Teach Physics to Your Dog, author and Union College Physics Professor Chad Orzel talks about an extension of the Double-Slit Experiment called the Quantum Eraser. According to Orzel -- and before him to physicist and wise guy Richard Feynman

-- everything the average person needs to know about Quantum Physics is contained in the Double-Slit Experiment.

When Thomas Young first did the Double-Slit Experiment in 1803, he proved that light travels in a wave. He showed this by aiming a narrow beam of light at a barrier with one or two slits and placing a screen behind it. When the light went through one slit, it hit the screen in a single blob. But when it went through two slits, the light on the screen spread out into many stripes of dark and light -- which is what you would see if two waves were overlapping to create an interference pattern.

When Quantum Physics was introduced, the experiment was done with a stream of photons passing through the slits one photon at a time. Amazingly, over time the individual photons also created an interference pattern on a screen on the other side -- meaning that each single photon was interfering with itself as it passes through both slits at the same time!

The Quantum Eraser experiment just makes this weird result even weirder. First polarizing lenses with different orientations are put in place so that you can tell whether the light went left or right through the slits. "Labeling" the photons in this way makes the light go back to acting like particles -- the interference pattern is erased. And if you add still another polarizing filter, so that you can't tell which way the particles went, the pattern reappears!

When I read in Orzel's book that the May 2007 issue of Scientific American had a Quantum Eraser experiment you could do at home, I knew I had to try it! After a bit of searching, I was able to find the article online. (Actually, what I found is everything but the article, but the sidebars and other content include everything you need to do the experiment.) Like a lot of demonstrations that we try, it was a little hard to tell what, if anything, was happening, and I'm not sure it was completely successful. However, the results we did get were good enough to be worth sharing here. The article includes some trouble-shooting tips that may produce better outcomes if we ever try it again.

The experiment consists of four parts:
Obviously, since we were using a cheap laser pointer and weren't sending light through one photon at a time, this experiment doesn't prove that a single particle will go both ways at once, but it does give you a good approximation of what happens on a quantum level. Below is a description of what we did: 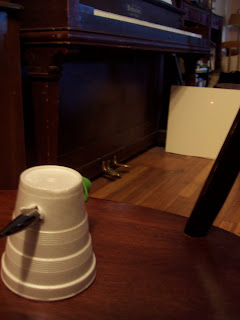 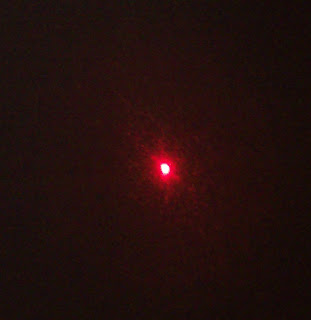 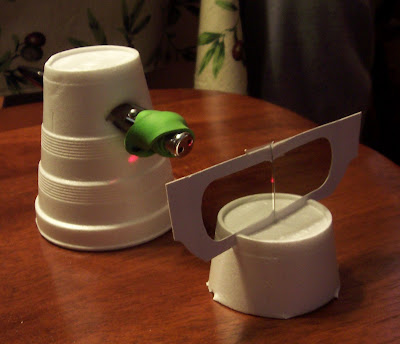 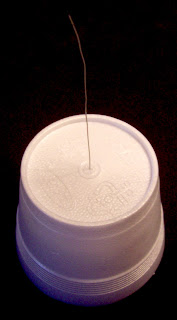 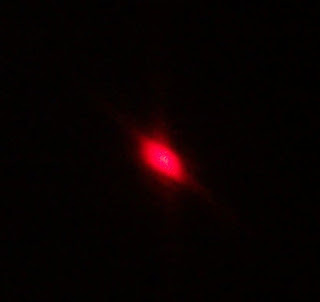 As I said, if we try this again we will try moving some of the parts around to get better results. Just for the record, the glasses we used had lenses which were tilted at 45 degree angles, rather than the traditional horizontal and vertical. However, they were still perpendicular to each other, and we rotated each the proper amount from its starting point, so I don't think it mattered.

In my opinion, we achieved some interesting effects, for a living-room physics lab.